On thanksgiving day, 1997, after a life of chronic illness and months of declining health, my father died. 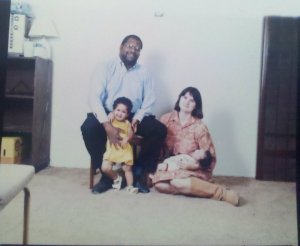 I was very close to him, and he was my role model, and the family member I was closest to, so his death hit me very hard. For years after, my family didn’t celebrate the day. Instead, we would get an ice cream cake, light a candle, and remember him.

After high school, I learned more about the actual history of the day, and of the US, and I became downright uncongenial about it. Celebrating a day that has personal pain for me, and shared pain for indigenous Americans, has for a while now been utterly beyond me.

But this year, I have even less cause for celebration.

The murder of Michael Brown, Jr, and the subsequent absolution of his murderer are an open wound. For over three months, Ferguson has been a present reality in the lives of many Black Americans, and in the lives of our friends and supporters of all races. I travelled to Ferguson at the end of August, because being in Oregon and not in Ferguson supporting the community was too painful. I averaged a panic attack every third day for the month following Mike Brown’s murder. I barely slept, anxiously following the tweets of protesters on the ground. I was a complete mess of fear and rage and sorrow.

Fibromyalgia symptoms can flare up in response to stress, and on this 111th day without Mike Brown in the world, I am stressed. I have been stressed for each of those 111 days. I do so many things beyond my capacity, but I’ve been clutching tight to my life here to distract from the fact that I could be in Ferguson right now, organising. It’s so hard to complete and fulfil the seeming-arbitrary deadlines and complete some of the mindlessly numbing busywork that I am assigned at school, when I know people I love and admire are in daily danger. Though I do so much, it never feels enough.

Still, I am where I am. Since I cannot go to Ferguson now, I’m doing what I can from home: working with several folks I know to independently publish a book of work by poets of colour, with profits going to organisations active on the ground in Ferguson.

Tessara Dudley is a scholar and Poet-Activist living in Portland, OR, and preparing to get a PhD in African and African Diaspora History. Her poetry and personal essays have been published by Black Girl Dangerous, Zoetic Press, Wordgathering, Minerva Rising, and Words Dance Publishing. Her hobbies include studying history, fighting oppression, building safer communities, and knitting. View all posts by tessaradudley

One thought on “Thankfulness, Ferguson, and My Father”